It's a common story in many marriages: a wife makes the husband feel that she is not interested in him in bed anymore. More often than not, he then thinks about getting a love doll to practice on... without her blessing, of course. Maybe I just need to, he thought. Most wives hate the thought of adding them into their sex life as a married couple. Many wives fear a doll will distract their partner's attention from them and turn it towards just a hunk of silicon.

But much to his wife Isabella's sure displeasure, Shandra bought one anyway. He figured she would never notice it since she didn't seem to be paying much attention to sex for a while now.

So he got it home and unpackaged the doll, which he made sure looked like his wife for ease. He wanted to make sure if he started becoming easily aroused by the doll, he could still be aroused by his wife. The detail was super impressive; almost like this doll was actually his wife. Only now the doll wasn't uninviting like his wife.

Just about every guy - when they get a new doll - thinks, I can't wait to finish inside this thing and rock its world. Shandra was definitely thinking that, but was cautious to not alert his wife to his new toy.

She had come home earlier than normal and just fallen asleep in the other room after a bad day at work.

The doll had a frozen expression as he laid it down on the bed spread eagle. He was admiring its figure and joints before nervously unzipping his pants letting his rock hard cock escape and flop out. Am I really about to do this? Then he ran his eyes over the doll's smooth skin and it's inviting position... no sign that she was opposed to what he wanted to do to her.

Before taking his pants off, he thought to himself, Wow, just look at how flawless she is down there. Oh boy! Rather quickly now that he was getting hornier, his dick bounced and twitched in anticipation as his pants flew off, his shirt was next which he tossed away and onto the floor.

Now he was standing nude and fully erect by the bed. Eager now, he mounted his doll grunting as his dick found its mark on the doll’s O pussy. It effortlessly slipped in, welcoming him without any hesitation or disinterest. The sensation of laying on his doll and immediately thrusting his cock into her felt even more erotic than his wife. The doll didn't need to be turned on, or convinced to "fool around." It lay there with one purpose...to allow a man to fuck her. He was enjoying this experience so much, he thought this could become his regular relief since this experience felt better than his wife... but he couldn’t dare admit this.

Thrust after thrust he got more and more into it until he heard the door slam open and Isabella yelling, "WHAT THE FUCK, SHANDRA?!"

He tried to explain and tried to console her, but it was no use. She was fired up and nothing was calming her down. She slammed the door shut and ran away for a while; leaving him alone with his doll.

He decided he couldn’t bring himself to finish so he stood up in sadness of this event. He loved his wife, so this was a giant fuck up. He was just experimenting to see if something new could rekindle their sex life.

What Shandra didn’t know was that Isabella had been testing him. She noticed the doll packaging under the bed in the other room when she came home. She knew exactly what that doll was and where it came from. That specific doll company specialized in selling sex dolls to married men. They knew many wives did not approve of their husbands fucking silicon women. The tube of "lube" provided with the doll was actually a special ointment. If semen mixed with the chemical, it would become inert. But if the man didn't cum in the doll with the "lube," it would start a metamorphic process on the husband.

Isabella had faked going to sleep to test if Shandra would choose to attempt making love to her, or if he would decide to fuck the doll instead. When she heard the grunting and squeaking from the other room, she knew the result and deliberately sabotaged his orgasm. Any second now, the doll's failsafe would activate since Shandra didn’t finish. She figured this would be giving him a taste of his own medicine. She decided she would rather have sex with a doll, too...

Shandra was sitting on the bed hanging his head in sorrow. He opened his eyes and looked down at his dick; it seemed to be more pink than usual. Then it started to smooth out and turn to an unnatural color, which made him panic. In his panic he didn’t notice that his hands were now mittens like that of the doll...but then the doll's hands dissolved. It looked like a fog of silicone now travelled from where the doll’s hands were to Shandra's now-mitten hands.

Slowly parts of the doll before him began to dissolve and whisk mistily to his own body. Each part of the doll that dissolved changed a different part of his body.

"Isabella, HELP!" He tried to move himself out of bed, but his legs were hollow. They were simply inflated silicone now and couldn't support the weight of his torso - which hadn't transformed yet and was heavy.

His arms were now completely dollified. Then, the doll’s chest was now gone leaving a head with a mouth begging to suck cock. Then this, too, began to fade away.

Shandra's mind went empty, he could feel himself in a sitting position spread eagle and waiting for use. He had no thoughts, and couldn't move. He was just aware of this exact moment. No memory, no thoughts of the future, just hollow and here in the present.

"...new mistress...use dolly..." were the only whispers in Shandra's hollow head.

She left Shandra sitting, invitingly, on the bed. As she walked out she turned and said to her new doll, "You decided you wanted to fuck a doll instead of your wife. After catching you, I also decided a doll would be a better sex partner. So I guess I'm trying to say...TAKE THAT!!"

Her words fell on unemotional ears, though. All that was in Shandra doll's head now was "...use dolly mistress...so hollow...so fuckable...use plastic Shandra mistress...use dolly..." 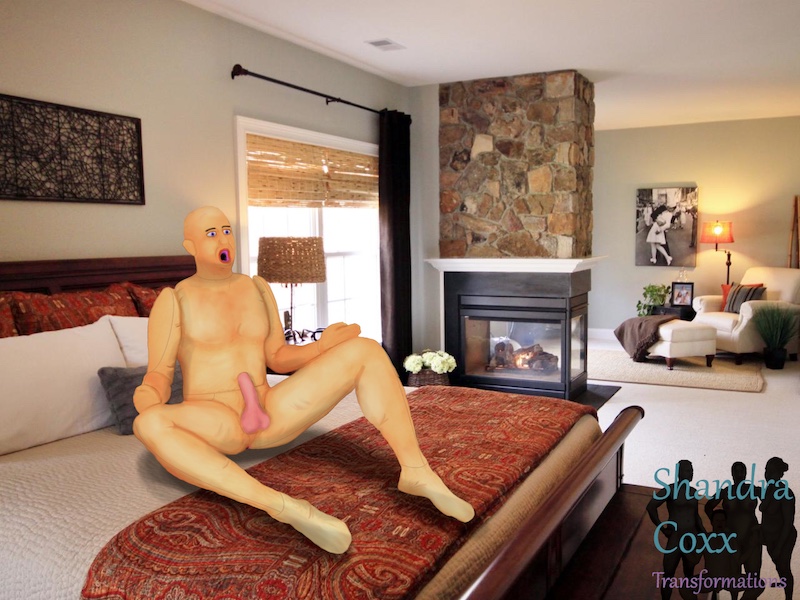 You can also leave your feedback & comments about this story on the Plaza Forum
If you've enjoyed this story, please write to the author and let them know - they may write more!
back to
Dollstories